We go through a lot of lemons in our house. For various reasons, my housemate and I each have a little lemon juice in some warm water to begin our days. I also love to cook with lemon juice — I add it to lots of things. So we end up with a lot of lemon rinds.

For the last six or seven years, I’ve kept a compost of some sort. For many of those years, it’s been a worm farm. Worms don’t like citrus peels. I’ve also found that they take forever to break down in a regular variety compost, even when I’m pedantic and chop them up into tiny pieces, like I do with all the other things that otherwise take a long time to break down, like avocado skins. Yes, I think it’s fair to say that I’m a little obsessed with what happens to food scraps once they become waste.

The research that I’ve been doing for the last six months or so has really only added to that obsession. I’ve spent that time looking at waste, in the food system in particular, but also just as a general concept. It’s for something else I’m writing, so I won’t share too many of my thoughts here, but suffice to say that I think the percentage of food that’s wasted in the world (nearly half — more here, if you’re interested) is horrifying, and I think the concept of waste, generally, is all about perspective.

Which brings me back to the hundreds of lemon rinds. It occurred to me some time ago that there must be something else I can do with the bits of the lemon we don’t drink or eat, other than throw them out. Without really knowing the answer, I started keeping them, putting them in a bag in our freezer. (Living with me, if you want to put anything in the freezer, can be… challenging — I make full use of that space!) And in the meantime, I began looking for uses for lemon rind and peel.

There are heaps, of course. Among other things, I discovered I could soak them in vinegar for a few weeks to make a citrus oil cleaning spray, and, most exciting to me (and perhaps what should have been obvious already), was the idea of lemon marmalade.

I’ve eaten marmalade since I was a child, on and off, and I always knew that it was citrus peel, but for some reason it never occurred to me that I could eat the parts of the lemon I thought of as inedible by making my own spread. That this never occurred to me is especially strange because I make a lot of things myself that other people buy, simply because I’m curious. Cooking, to me, is an exercise in curiosity (quite apart from its leading to eating).

A very quick search brought me hundreds of recipes. It also brought me to this lovely essay on preserving citrus.

Citrus is usually present in most marmalades or jams, because the pith (the white bit under the zest) and the seeds are high in pectin, which is what helps the jams to set. This large amount of pectin means that citrus jams and marmalades are a good place to start when you’re new to the game like I am. (It also means that you can pretty easily make your own pectin at home, for use in jams with other non-citrus fruits.)

So I made some of my left over lemon peels (plus some orange peels I had lying around as well) into marmalade. It was delicious. And easy.

I cooked some lemon rinds, chopped, for about an hour, or until they were soft. I also added a little package of saved seeds and the fruit flesh, which I’d been keeping in a jar in the freezer, along with a couple of pieces of fresh ginger and some cloves. The recipes I found said to use a muslin bag, but I didn’t have one, so I just sterilised a cotton napkin by soaking it for a few minutes in boiling water and tied it up into a package with a piece of cotton twine. Then I added the mix to a food processor and blitzed it a little. Once I had the texture I wanted with the fruit, I weighed it (I had about 330g). The general rule with jams is 1:1:1 fruit:sugar:water, and so I added about 330g each of water and sugar, along with the fruit, to a saucepan, brought it to the boil and then simmered it for quite a long time, until it thickened. Apparently the magic temperature for setting jam is 220 degrees, but I don’t have a thermometer that goes that high, so I used the “wrinkle test”, where you put a few teaspoons of the mixutre on a saucer, put that in the freezer for five minutes, then run your finger across it. If it wrinkles, you’ve reached the right consistency.

Earlier, I’d put a couple of clean jars in the oven on a high temperature to sterilise them before I put the marmalade in them. Once the marmalade was nice and thick, I pulled those jars out and spooned the jam into them. (There are two tricks here: 1. guessing how much jam you’re making so you have the right number of jars, and 2. remembering the jars are hot — I failed to remember and burnt my thumb quite badly.)

I don’t think I’ll ever throw out a lemon peel again. 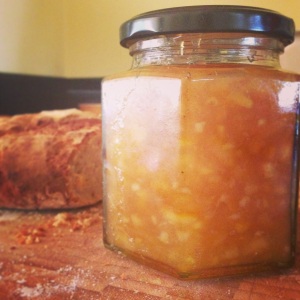 This brings me back again to the idea of waste, and how it’s all a matter of perception. I wonder how much of what ends up in my bin — or in anyone’s bin — is in fact something of use, if only we knew what to do with it. (Also, does anyone want some marmalade? Because I’m probably going to be making a lot of it. I’ll take flavour requests.)

I’ve not used the citrus/vinegar cleaning spray yet, but I’ll put an update here when I do.

4 thoughts on “Waste and lemons”