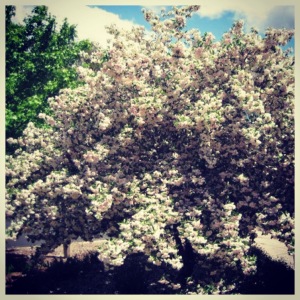 When my brother and I were little, we used to sit in the dirt under the crab apple tree that grew beside the back door of our home and pile handfuls of dirt and handfuls of fallen crab apples into buckets. We’d fill the buckets with water, and attempt to make soup.

I don’t remember if we ever intended to eat the soup, but I do remember various strategies we employed to try to soften the crab apples so they might be edible. The crab apples were small — more like red berries really — and rock hard. Even trying to grind them between two flat rocks didn’t break them down. We tried soaking them in water for a short while before pounding them with rocks, we tried dropping them from the balcony. I’m not sure what motivated such a strong desire for softened crab apples. Perhaps we were thinking about chewing them, or perhaps we just wanted the texture of the crab apples to match the texture of the mud.

I’ve tried for some time to think of an anecdote that might illustrate how I came to be fascinated with making things. But the truth is that I don’t really remember where or when it started — although this story about the crab apples, and its placement early on the timeline of my life might suggest that the desire to make might be something I was born with or something I was taught from a very young age. And indeed both my parents are makers, and their parents before them. Things made from wood and stone, wool and cotton. Things made from food materials, destined for lunch boxes or the dinner table.

Anthropologist Tim Ingold writes about making as being similar to walking (2010). He suggests that both making and walking are a form of ‘wayfaring’ — that is, they are a way of knowing or coming to know, of making one’s way through the world. He describes a way of making that considers that the materials with which a person makes things are not inert, that skilled practice “is not a question of imposing preconceived forms on inert matter, but of intervening in the fields of force and currents of material wherein forms are generated” (pg 92, 2010). He suggests that to make is to “find the grain of the world’s becoming and to follow its course while bending it to [an] evolving purpose” (pg 92, 2010).

When I first began trying to make things using food scraps as materials, it became obvious to me very quickly that the materials I was using were not inert and that I would need to be willing to evolve my ideas about what I was making and how in order to avoid throwing out vast quantities of failed attempts. This was, after all, part of the reason I was attempting to make things from food scraps in the first place: I was trying to find value in these things that were usually considered waste.

Of the materials I use, I have been experimenting with lemon rinds the longest. My household goes through a lot of lemons, and I’d been taught somewhere along the line to keep them out of the compost for fear of upsetting the critters who made it their home. I also kept turning up yet-to-break-down lemon rinds in compost I was trying to use on the garden, and it was irritating to have to pick them out. The rinds that were kept out of the compost were going in the rubbish bin. This bothered me—mainly because I didn’t believe this could be the only answer. Lemon rinds are an organic material, I thought, surely there was something else I could do with them.

I tried making marmalade first (and in finding out how to do so, came across this lovely essay about marmalade making). It was easy and delicious, but I realised very quickly that I’d need to make an awful lot of marmalade to deal with the volume of material the household produced. So I tried making a lemon vinegar for cleaning. Again, it was very easy, and it was a brilliant all-purpose cleaner — perhaps the best I’ve ever used — but there’s only so much of it that a household needs.

I read that lemon oil was good for cosmetic purposes, and had a brightening effect on the skin and hair. I’d been making my own hair washes and skin moisturisers for some time, so I began trying to incorporate the lemon rind. At first, I made the mistake of trying to use it fresh, and discovered that there is still quite enough flesh in the rind of a lemon to go mouldy and send an entire batch of face cream that way too. It wasn’t the appearance of visible mould that made me realise my batch was going off — the smell changed. It wasn’t awful, but there was something not quite right about it. And when I continued to stubbornly use it on my face, not wanting to waste the cream and the time and effort I’d put into making it, my skin went blotchy and itchy. Eventually, reluctantly, I put the whiffy face cream aside and started again.

A woman at my work told me about how women in India (where she was from) use lemon oil for their skin and hair, and about how they dry the rinds out so they can keep them for longer. She described rows and rows of lemon and other citrus rinds lined up on people’s roofs on hot days, and the vague citrusy scent that hung in the air.

When I tried it at home, it was spring. One day hot and sunny; the next, rain. The lemon rinds went mouldy again, but at least this time it happened before I’d put them in a face cream.

I began a dance with the oven. Every time I was at home for a stretch of several hours, I’d put a tray of lemon rinds into a very low oven. I call this a dance because one of the other uses for citrus rinds is as a fire starter, due to the oil in citrus being highly flammable. I did, thankfully, managed to avoid lighting my oven on fire, but the drying results were inconsistent, and required more of my attention than I really wanted to give.

Then I was gifted a dehydrator. The drying was much slower, much more consistent, and required far less of my attention. And slowly I accumulated jars of citrus (mostly lemon) rind for later use in making other things.

Describing this process of learning how to use lemon rinds rather than throw them out perhaps sounds tiresome and lengthy on paper. At times, I guess it was, but for the most part, this experimentation was fascinating. All the stops and starts and changes of direction have helped me come to know an awful lot more about lemons and lemon rinds, about what they might be useful for, but also about myself. Playing with lemon rinds has taught me how much I enjoy the smell of citrus, that my hair and skin do indeed get brighter when I use lemon oil. It’s taught me to trust my sense of smell and to notice how my skin reacts to the things I make. It has also taught me about the rhythms I follow in my daily life, and for what and how much I am willing to change them — it has shown me how much of what I do is habit, and given me an opportunity to look at those habits with a new perspective.

It has also changed the way I look at and feel about these materials, at the idea that they’re commonly dismissed and thrown away, and at the infrastructure and culture that makes it difficult for people to waste less than they do. There are, of course, the environmental impacts of continuing habits where food scraps and other food are wasted, and those are by no means insignificant, but they are not the main focus of my research. As well as the environmental downside to these food waste habits, there is this idea of Ingold’s that making is a way of knowing and learning, of coming to understand something about the world and our relationship to it. It saddens me a great deal to think that sending food waste to landfill might both contribute significantly to global warming and represent a missed opportunity for making — and for learning through making.

This is perhaps what most makes me feel it is a shame that we have a tendency to think about ‘matter out of place’ (Douglas, 1980) as dirt or waste. In her seminal book ‘Purity and Danger: An analysis of the concepts of pollution and taboo’, anthropologist Mary Douglas examines the ways in which cultures come to categorise things as ‘unclean’ (and, I would argue, as ‘waste’), often because they do not neatly or easily fit into another category. “As we know it,” Douglas writes, “dirt is essentially disorder” (pg 2, 1980) She argues that we shun dirt (or waste) because it “offends against order” (pg 2, 1980). Eliminating dirt or waste is not a negative action, Douglas says, “but a positive effort to organise the environment” (pg 2, 1980). It is an attempt to make our environment conform to an idea we have of it, “to impose system on an inherently untidy experience” (pg 4, 1980).

Douglas’ book analyses cultures across time, finding this systematic categorisation at work (although in different ways) in both ancient and modern cultures, so my argument is certainly not that older cultures managed this objectively better. Instead, my exploration of food waste is an attempt to challenge the boundaries of some of these categories in our own culture, to suggest that there might be something to be learned from looking at, rather than eliminating, what we might refer to as ‘food waste’. It is to suggest that the waste is not so much the materials themselves, but in the labelling of the materials as dirt or waste, and the (failed, as it turns out) attempt at eliminating them. It is to suggest that looking at what we label ‘waste’ might have something to teach us, good or bad, about how we habitually organise our world in other ways.

I think of these experiments of mine with food waste as a form of play. A game that has extended out over years, and will no doubt continue to be played. What I am doing with these food scraps is not so different to what my brother and I did with mud and fallen fruit and pieces of stone. He and I were playing with materials of the world, perhaps imitating the dinner-making process our parents undertook in the kitchen, but we were also engaging with the world in a way that taught us about texture, about how different materials didn’t always behave the same way as one another when they were, say, mixed with water or pounded with rocks. We were probably finding out about ourselves and about one another. We were learning that that the non-human world was not something inherently or only dangerous, even when we were actually playing with dirt; that being in the world can mean engaging with it as a wayfarer, coming to know it through trial and error, rather than applying preconceived categorisations. We were exploring the world. We were making our way, untidily, probably covered in dirt, through it.