Today it’s been six months since my housemate and I landed in Melbourne. I can’t quite believe it’s been that long. But at the same time it seems like I’ve been here much longer. Time is still doing strange things for me.

A number of people said to both my housemate and I before we left Sydney that it takes six months to a year to really start feeling at home in a place after you’ve moved, and that’s certainly what I remember from when I moved in the other direction five and a half years ago.

Actually, when I’d been in Sydney six months, I had a bit of a breakdown. The enormity of what I’d done hit me for the first time. I’m not sure it will be like that this time around (well, I certainly hope it isn’t), if only because there was a lot more lead time before this move than there was for the earlier one.

Do I feel at home in Melbourne? The simple answer is yes. Yes, I do feel at home here. The more complicated answer is that I feel more at home in myself here than I think I ever did in Sydney — but I don’t really know how much of that is to do with the places themselves and how much is just growing up a little more.

The first few months in Melbourne were very strange for me. I guess because I’d lived here before, and because my housemate and I have ended up living in a neighbourhood in which I’d lived before, I had the strange sensation of not being entirely sure where I was in time. I mean, I knew intellectually, of course. The best way I can think to describe how I felt was that my body wasn’t quite sure. The scents, the sounds, the particular colourscape of Melbourne; those things belonged to a different time in my life, and here I was all of a sudden living among them again.

I was describing this sensation to a friend from Sydney who came to visit, and he asked me if it was because Melbourne had changed, either subtly or otherwise. I realised that it wasn’t that at all. Melbourne was much the same. But I had changed. I’d changed in the five years I’d lived in Sydney (of course), and being in Melbourne again was like being face to face with the version of me who lived here all those years ago.

Thankfully, that strangeness has mostly passed now. And what’s settled is a increasing calmness. I’ve found myself being paid to do things I love, which is obviously great. I’m living in a great house in a great area. I feel like I can take a breath and, for the first time in a long time, think about what I might like to do in the next few years. Of course there are plenty of little improvements that could be made (there always are), but for the most part, life is pretty good, six months in. Thanks Melbourne. 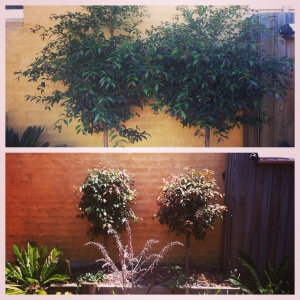 While I’ve been settling in, I’ve been taking pictures of the garden as I play around in it, improving the soil and planting things. The bottom picture is of a couple of lilly pillies that were already in the garden when we moved in. I think I took this the day we picked up the keys. The top picture I took a couple of weeks ago. That they’ve grown so much (and gone a bit wild, really) I think perfectly illustrates the first six months of life in Melbourne for me.